The official opening ceremony of newly built 36, 5 km of the main road M17.3 Neum – Stolac marked the completion of another successful project implemented by the FBH Roads. 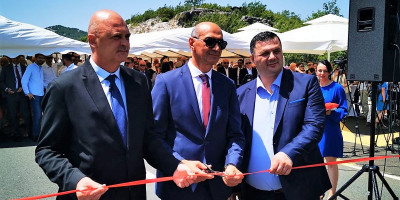 The extensive activities, i.e. the design of the alignment, the provision of main designs and feasibility and EIA studies etc, led to the construction works on seven lots/subsections into which this project is divided, namely:

The more dynamic implementation of this project was related to the Federation Roads Modernization Program (2018 - 2022) which is financed by loans from the World Bank (WB) and the European Investment Bank (EIB), and approved by the FBH Government.

"This new and modern road is primarily a functional access to the Adriatic Sea for the citizens of Bosnia and Herzegovina that is entirely on the BH territory and enables the connection of the interior of the country with its only maritime city and tourist centre. Furthermore, the construction of this road will significantly facilitate the traffic over the main road M17, by reducing traffic jams, eliminating delays at the border crossing with the Republic of Croatia and increasing traffic safety in its entirety," said Ljubo Pravdić, director of FBH Roads.

The total value of this project, including FBH Government budgetary funds, FBH Roads own funds, loan funds and expropriation costs, amounts to BAM 96.523.354,33.

Contract for the construction of Bugojno Bypass