Contract for works on the Novi tunnel

Next phase of the implementation of the Mostar South Bypass on M6.1, the section Miljkovići - Rodoč - connection to the M17, started today with the signing of the contract for the construction of the 900 m long tunnel Novi. 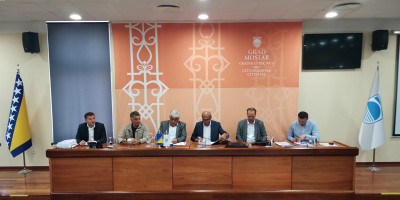 In the presence of the mayor of the city of Mostar, Mario Kordić, the contract was signed by the director of FBH Roads, Ljubo Pravdić, and representatives of the contractor - JV Hering d.d. Široki Brijeg and Azvirt LLC, Azerbaijan.

"The works on the Novi tunnel are a continuation of the activities implemented by the FBH Roads under Lot 1 of the Mostar South Bypass Project which include works on the approximately 1,700 meters long alignment from the Varda roundabout to the entrance to the Novi tunnel, including the Marijanović Draga viaduct (L= 200 m).

Works on the main and service tunnel pipes shall be carried out under the project," explained Mr. Pravdić.

Contract period is 24 months. The contract value is BAM 25.131.195,29 will be financed from the loan funds of the European Bank for Reconstruction and Development (EBRD).

Contract for works supervision amounting to BAM 724.524,00 was awarded to a group of bidders consisting of IGH d.o.o. Mostar, Integra d.o.o. Mostar and Divel d.o.o. Sarajevo.